Facebook
Twitter
WhatsApp
Linkedin
Email
Former Minister of Solid Mineral, Dr. Kayode Fayemi, has been sworn-in as the Ekiti state governor by Justice Ayodeji Simeon Daramola, the Chief Judge of the state.
Fayemi, was former governor of the state between 2010 and 2014, and regain the seat on the platform of All Progressives Congress (APC).
He defeated the Peoples Democratic Party’s (PDP) candidate, Prof. Kolapo Olusola, and 33 other candidates to win the governorship election.
The 53-year-old governor is a native of Isan-Ekiti in Oye Local Government of Ekiti State.
He was defeated by Mr Ayodele Fayose in 2014.
The new deputy governor, Chief Bisi Egbeyemi, was first to take the oath of office.
After taking the oath of office for his second coming to finish his eight years tenure, Fayemi inspected a guard of honour mounted by the police.
Among political leaders at the inauguration of the governor were the Mr. Boss Mustapher, the Secretary to the Government of the Federation and Governor Nasir El-rufai of Kaduna.
APC leader Bola Tinubu, Governor Rotimi Akeredolu of Ondo State, Governor Simon Lalong of Plateau State, the Ooni of Ife, Oba Ogunwusi Ojaja II, among other dignitaries attended the ceremony.
Also the governorship candidate of Lagos, Mr Babajide Sanwo-olu, was also in Ado-Ekiti to attend the ceremony.
‏ In a tweet@jidesanwoolu, he said: “I arrived Ado Ekiti for the inauguration of my dear brother, Dr. John Kayode Fayemi @kfayemi as Executive Governor of Ekiti State. It was momentous meeting national leaders and elders of our great party the @OfficialAPCNg , Chief Bisi Akande and Chief John Odigie Oyegun’’ 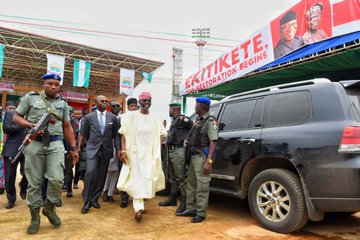 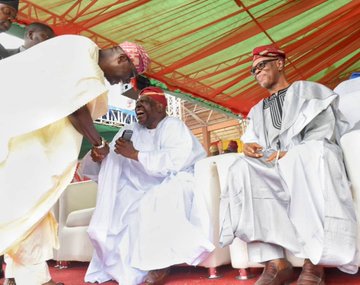 I arrived Ado Ekiti for the inauguration of my dear brother, Dr. John Kayode Fayemi @kfayemi as Executive Governor of Ekiti State. It was momentous meeting national leaders and elders of our great party the @OfficialAPCNg , Chief Bisi Akande and Chief John Odigie Oyegun.

Ekiti state was created out of Ondo state on 1 October 1996 alongside five other states.

COVID-19: WHO Suspends Trials of Hydroxychloroquine

ABOUT US
Sky Daily is an online newspaper based in Kaduna, Nigeria with a vision to be the most reliable and dependable newspaper in Nigeria and the rest of the world.. Sky Daily aims at providing news with facts and objectivity.
Contact us: editor@skydaily.ng
FOLLOW US
© Sky Daily Nigeria
MORE STORIES

Lalong not defecting to PDP –Commissioner

Money, Vote Buying And The Bane of Nigeria’s Electroral System, By...

February 19, 2019
Thanks for subscribing! Please check your email for further instructions.